Combining equal parts of deep funk, high-energy punk, and frantic ska, the Los Angeles-based Fishbone was one of the most distinctive and eclectic alternative rock bands of the late ’80s. With their hyperactive, self-conscious diversity, goofy sense of humor, and sharp social commentary, the group gained a sizable cult following during the late ’80s, yet they were never able to earn a mainstream audience.

Led by vocalist/saxophonist Angelo Moore, the band formed in 1979 while the members were still in junior high; the original lineup comprised Moore, Chris Dowd, Kendall Jones, Walter Kibby II, and John Norwood Fisher. After performing in local clubs during the early ’80s, the group signed with Columbia Records in the mid-’80s, releasing a self-titled EP in 1985. The following year, Fishbone released their first full-length album, In Your Face. While it was marred by a somewhat slick production, the sheer energy of their performances burned through the slightly polished surface. In 1987, the band released the Christmas EP It’s a Wonderful Life (Gonna Have a Good Time). 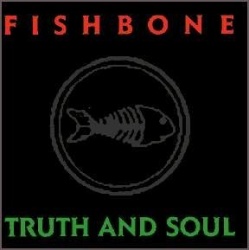 Truth and Soul (1988), Fishbone‘s second album, captured the band at their most ambitious, as they slammed back and forth between heavy metal and funk, throwing in an acoustic number and a cover of Curtis Mayfield‘s “Freddie’s Dead” for balance. The album expanded their audience and charted at number 153. However, the band didn’t record a new album for another three years. In the meantime, they made two EPs — Ma and Pa (1989) and Bonin’ in the Boneyard (1990) — which basically comprised several B-sides. Before 1991’s The Reality of My Surroundings Fishbone added second guitarist John Bigham. The Reality of My Surroundings didn’t depart from the band’s reckless eclecticism; it refined it. The album was a hit, peaking at number 49 and receiving positive reviews. However, the record didn’t establish the band as a mainstream success, nor did 1993’s Give a Monkey a Brain and He’ll Swear He’s the Center of the Universe, despite their appearance at the third Lollapalooza.

Even when the third wave ska revival began to rise to popularity in 1996, Fishbone was left behind, as their 1996 record Chim Chim’s Bad Ass Revenge — their first album for Arista — was ignored, as was the double-disc compilation Fishbone 101: Nuttasaurusmeg Fossil Fuelin. Despite their poor sales, the group remained a popular concert attraction, issuing the all-star Psychotic Friends Nuttwerx in the spring of 2000. Unfortunately, Hollywood Records had little support for the album and it disappeared after a few disappointing months. They were dropped from the label the following summer, with side projects and various other things keeping them busy during this rough period. An EP featuring a 20-minute jam with Primus, entitled Friendliest Psychosis of All, was released on their own label in the spring of 2002, followed by a live album full of new songs, Live at the Temple Bar and More, in the summer. In 2006 their album Still Stuck in Your Throat appeared in Europe. It arrived in the U.S. in April the next year.

Tickets will be sold online thru World Famous Productions, as well as at The Works, Wildberries, People's Records, or any Northcoast Horticulture Supply store.

Cannifest is the weekend of April 15th & 16th, 2017 at the Redwood Acres Fairgrounds in Eureka, California. We offer discounted rates at some local hotels, as well as limited camping spots for both tent and RV. First come, first serve on RV spots.

The Redwood Acres Fairgrounds in Eureka, CA
Toggle the Widgetbar